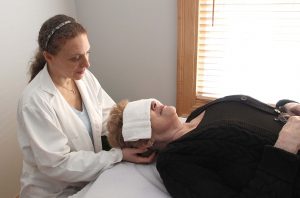 Throughout my 20th I used to have acne. It seemed like the whole world was looking at my face and I wanted to do anything to clear my skin.

Being from Eastern Europe, I was familiar with a more holistic approach to medicine, and the idea of taking antibiotics, topical creams, or even Accutane to clear my skin, did not appeal to me. Deep inside, I knew that acne could not be caused by bacteria alone, and the source of inflammation had to be coming from somewhere other than the skin. Treating acne symptomatically, without addressing the cause, made no sense.  But what was the cause?…

I immigrated to the U. S. at the age of 19. I lived in Brooklyn NY, and at first, the transition was difficult.  It meant learning  English while simultaneously taking a full program of premed courses.  During my college years I was volunteering at the hospitals. I was then frustrated both by its inability to cure my acne, and by the general practice of medicine in the U.S. which treated symptoms not causes. My frustration let me to apply to a different type of medical school, Bastyr University in Seattle Washington.  It is a Naturopathic Medical School, where medicine is taught according to the following principles:

These principles made sense to me, and decided to follow this path, and was accepted to Bastyr University,  Naturopathic Medicine Program, where I finally was able to fulfill my dream of studying a type of medicine that worked.

Sometime in my second year at Bastyr, I discovered through trial and error, and a bit of intuition, that gluten seemed to be causing my acne. Though I tested negative for Celiac disease, still when I stopped eating products with gluten, my acne disappeared.  That was around 1997, before the connection between gluten and inflammation was known. Because I achieved my goal of curing my acne and was busily immersed in my medical studies, I didn’t delve deeper into the question  of whether gluten was a true cause of acne.  I later discovered that in most people acne was caused by both bacteria ( the conventional thought), and by the internal toxicity that builds up in our bodies. Gluten, though not the main cause of inflammation, was an additive factor working in conjunction with the toxic overload. These toxins  include heavy metals, pesticides, various chemicals, formaldehydes, as well as the toxic waste of yeast and parasites.  Avoidance of gluten helped me reduce the inflammation that the toxic substances were causing, but it did not eliminate them from my body.

One day, while still at Bastyr, I  discovered that I was loaded with heavy metals such as lead, mercury, arsenic, and cadmium. Since my immediate problem (acne) no longer plagued me, and since I did not want to interrupt my active life, I delayed addressing the heavy metal issue for over 10 years.

Time moved on, but the heavy metals remained. When I was trying to get pregnant in my late thirties, the heavy metals were presenting even greater concern.  Few unsuccessful attempts of natural conception after the age of 35 were my wake up call. With the biological clock ticking, I finally begun my detoxification protocols. However that same clock rushed me to stop my detoxification protocols prematurely.

I got pregnant. As a result of not completing my detoxification protocols, I developed complications during pregnancy, and had a difficult birth of my twins.  I had to stay on bed rest, had elevated liver enzymes, required an emergency C-section, followed by severe blood loss right after the childbirth.  Sometime after my twins were born, I realized they had Lyme disease. Apparently I had a silent case of Lyme and inadvertently passed it along to my children. I feel that had I done the detoxification  protocols in a timely manner, my children’s immune system would have been healthier,  and better able to avoid Lyme.  As a result , I have spent many years helping them, and myself to get healthier, to detoxify , and to strengthen our immune systems.

With hard work and dedication, I am finally getting where I want to be with my family’s health.

Perhaps my story will inspire you. There is always a way to transform and improve a situation, as long as we are willing to make the effort. Sometimes there is just a lot more work to do if we wait to do it later.

The intelligent principles of naturopathic medicine are there to guide us towards optimal health. They help not only ourselves, but affect those we are connected with. If we follow these principles in a timely manner, many bad things can be avoided, and be replaced by good outcomes.

When I see a patient I try to see their problems from the inside out.  Sometimes things are not the way they seem.  In order to help,  I need time to investigate to see where the problem originates.

They call me a naturopathic detective. My personal experience led me to choose disorders of the immune system as my specialty. Those include but not limited to chronic infections, autoimmune disorders, allergies, skin problems, and chronic sleep issues.  Solving such illnesses requires me to delve deeply into the case, to understand cause and effect,  and to connect the dots with the presenting symptoms.

I love my work because when I am able to provide the exact treatment my patients need, and to empower them by teaching how to take care of themselves, they get better.  I know then, I was able to help them, and this is my greatest reward.

My visits are long. I make careful observations, take a detailed history, ask questions about your past and present, ask questions related to you illness, and even questions that seem unrelated (but often are related), before determining a treatment protocol.  If necessary, I will order laboratory tests, some are common and widely available, others are specialty tests offered by independent laboratories.

I use only finest quality products that are designed to work with your immune system to help you heal.

Finally, I expect that you do your part of the work by following your protocol and committing to your recovery with the same determination as I do. Together we are a team!!!

Together, we will make it happen!!!  Together we will achieve success!!!